By Donna Merrill on March 27, 2016 in Internet Marketing

This post was most recently updated on August 1st, 2016 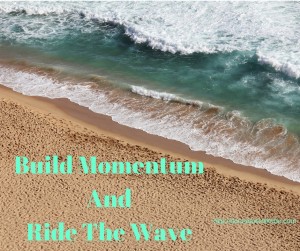 Your online business can become a crushing success when you learn how to “Build Momentum And Ride The Wave.”

The problem many people encounter is that they do a few things and then sit back and wait for things to happen.

They actually stand by and watch, hoping and praying that some kind of momentum will start to roll and their business will suddenly be on top of the world.

But it doesn’t quite work that way, does it?

It sure doesn’t for me, and I don’t see it working for anyone else either.

Here’s the thing you have to consider.

The 18 Wheeler Crawl & The California Stop

Ok, I’m giving you two examples of how this works.

I could have given you just one but I know it’s always smart to overdeliver.

Did you ever watch in your rear view mirror as an 18 wheeler rolls up behind you as you sit at a standstill?

Maybe you’re in traffic, or at a red light or stop sign.

But the 18 wheeler just keeps rolling along ever so slowly.

Inch by inch it crawls ever closer to you.

You sit and wait.

Foot on the brake, playing with the radio.

A quick in the rear view mirror and you see that truck is still coming up behind you.

You wonder when… if… it will stop.

Then the light turns green.

Special: [FREE] Learn To Blog… (My Video Inside)

You jump on the gas pedal and leave the truck well behind.

Why didn’t it ever stop?

All the cars were stopped, but the 18 wheeler just kept crawling along.

Growing up in Brooklyn, I know what a risky business it is to cross the street.

Even if you’re in the cross walk, the cars never come to a full halt at the stop light.

So, you learn to move fast when you have to cross.

I’ve witnessed more than a few fights between motorists and pedestrians, or between two drivers.

And it was pretty common for the person who never came to a full stop to claim the “California Stop” defense.

If you’re not up on the street lingo, a “California Stop” is not really a “stop” at all.

The driver kind of slows down, while looking to see if it’s okay to keep going.

If things seem okay, the slow roll is quickly accelerated into a race through the stop sign without ever having stopped at all.

It’s the same law of physics.

Newton was the first to formulate an equation for momentum, but philosophers had spoken of it in various terms much earlier.

Okay, I’m not a physics student but I can tell you this much.

Momentum is essentially the acceleration of a body in motion.

When something is at a standstill, it is motionless (physicists call it inertia).

It requires a great deal of effort (energy) to move something that is motionless, because it is grounded by gravity.

But once it is put into motion, far less effort is required to keep in moving, and it even tends to accelerate.

One of Newton’s key principles of momentum is that “a body in motion tends to stay in motion.”

This actually has a lot to do with online marketing.

I’ll get back to that in a minute.

The Fable Of The Truck And The Car

The truck failed to stop fully because the driver knew something about Newtonian physics.

If it were to stop, a great deal more energy (in the form of gas) would be required to get it going again than if it just stayed in motion.

The motion need not be great, although the greater the acceleration, the less the energy needed to maintain it.

So it’s easier for the truck to regain it’s speed if it can keep crawling, and avoid coming to a full stop.

The driver of the car knows the same thing.

If he/she comes to a full stop, then has to get moving again, it will take more time, energy and effort.

People in Brooklyn tend to be very impatient.

Special: [FREE] See How You Can Build An Amazing Email List

The don’t like to waste time, energy and effort.

So they don’t like to come to a grinding halt at stop signs (or traffic lights for that matter… lol).

So they’re just as intuitively aware of physics as the truck driver are.

The Moral Of The Story

Here’s what I find in blogging and other forms of online business.

You can’t get something started, like a new blog, a Facebook page or anything else… without a great deal of effort.

What I see so often, though, is that once people have put something like that into motion, they tend to back off on the effort required to make it really accelerate.

They figure they put a lot of work, time and money into getting their business rolling, now they want to sit back and enjoy the results.

They just slow things down because they think it’s taking too much work and they’re not getting the results they wanted fast enough.

So they just kind of slow things down and hope to see their business take off on its own.

Sometimes they even stop altogether and start doing something else for a while.

The problem with this is, that in order to build momentum in your business, you must keep accelerating it.

And without momentum in your business, it will trend toward inertia… and die.

So to be successful and build profits with your business, you must build momentum.

For your business to develop momentum, you need to keep expending the effort required to cause that to happen.

Once you create enough momentum, it reaches a critical tipping point.

This is the point at which it will start to accelerate almost effortlessly.

Then you can let up on your effort and it will still keep growing.

But you need to get it up that tipping point before you take the gas off the pedal.

The most important thing to do to generate the momentum your business needs to hit that critical tipping point is to continually work the process required.

Don’t worry about the results you’re getting.

They really don’t, even though they feel like the most important thing of all at the moment.

Once your business is finally getting good results, and they are coming in effortlessly, you will laugh at how you used to run to your affiliate stats to see if you made a small commission that day.

You will laugh at how you used to wonder if you could sell 10 copies of your ebook, or get 10 coaching clients.

You see, once you’ve built momentum, it tends to sustain itself, and just keep growing.

It’s like if you let a ball roll down a hill.

It’s slowest velocity will be the first 6 inches.

It will hardly seem to be moving.

By the time it gets half way down the hill it will be going so fast that nothing can stop it.

This is when your results will come in, not in drips and drops, but in waves.

You’re on top of it!

So let me know how can relate to this idea.

Have you ever felt the weight of the world on you because you keep watching results and wondering how to get them to be better, faster?

Has that ever slowed you down?

Has it been a momentum killer for you?

Have you already learned, in your online business, how to build momentum and ride the wave?

I look forward to reading your comments below.

And, please, don’t forget to share this article with folks who might find it helpful to their own online business.

7 Ways You Can Market Online
SEO Basics | And Beyond

66 Responses to Build Momentum And Ride The Wave