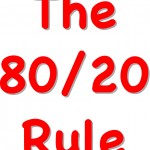 In the marketplace most of us are familiar with the 80/20 rule which is to give free value-laden content to our readers 80 percent of the time, and ask for something in return 20 percent of the time.  “Something back in return” can be offering an affiliate link to a product or service, or asking readers to opt in to your email list or even just to take a survey you’ve created to ascertain what your readers think about a topic.

Being the curious sort, I wanted to find out where the heck this ratio came from in the first place.  While I’m not an academic, my digging into the annals of history and economics led to a most interesting discovery.  Maybe some of you are savvy enough to have researched this already, but to most people, like me, this will come as a bit of a surprise.

So here goes our history and economics lesson!

The 80/20 Rule was attributed to an Italian economist Vilfredo Pareto in 1906.  He was a pretty interesting guy.  Pareto was a critic of the Italian government’s economic policies.  He was a pacifist  and when Mussolini nominated him to a senate seat in 1923, he declined.  He did not agree with Mussolini’s support of an economy that he believed impoverished the “many” to serve “the few”.

So this is refererred by the term “Pareto Principle” or “Pareto Efficiency”  which in his observations state that roughly 80% of the effects come from 20% of the causes.

Are you with me so far?

The “Pareto Principle” gives scientific validity to the premise that 20 percent effort can produce 80 percent of your results.  So it is important to spend more of your time and effort on the 20 percent of activity that will produce the greatest results.  So great, in fact, that it will bring you 80% of profit.

I was taking this rule out of proportion and was focusing almost purely on go-giving activities that would yield only minor profit.  Nothing wrong with that, but it is not results-oriented,  In the past few weeks, I have followed this mathematical concept and put my greatest energy into the 20 percent of activities that yield a far higher level of profitability.

How about you?  Do you find yourself spending most of your time answering your blog?  Syndicating like a crazy person?  Spending too much time on Facebook?

You all know by now I am a firm believer in the Social Media strategies, BUT…..now I am more mindful of balancing my communication efforts.  I’m engaging like I always do, but keeping mindful that a key amount of my day must go toward building a profitable business.

It’s time to Rock and roll!

Are You Hiding Under A “Blogging Umbrella?”
The Law Of Attraction – How It Worked For Me!