By Donna Merrill on January 10, 2013 in Personal Growth

This post was most recently updated on January 17th, 2013 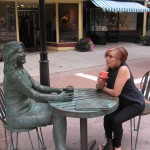 My mother used to walk me quickly through the subway station so I wouldn’t be exposed to the “crazy” people talking to themselves.

Get on the D-train, but they were still there.  She’d move our seat. Get a transfer uptown, get out and walk past the UN building, or Albert Einstein Medical Center.  It made no difference.  They were everywhere.  My father would scold us. “Just stay home… why do you want to go around all those crazy people that talk to themselves.”

I used to be scared of people who talk to themselves.  This was way before the blue-tooth that gave it social credence, and actually made it rather elite to talk to yourself.

I’ve had a successful psychic consulting practice for many years, now.

People come to me with all sorts of situations, problems, hurdles to jump and doorways to enter.

I realize, one of the best pieces of advice I often fall back on is… “talk to yourself”.

“Angela” was beside herself… figuratively 🙂

Me:
“Well, first of all, Angela, let’s not forget that Eric’s been married for 13 years and has two kids.  (duhh).  It’s not likely that this is a great path to be on if you want a serious relationship.”

Me:
“I see you’ve been talking to yourself.”

Me:
“To the contrary, you’re as ‘normal’ as anyone… that’s the problem.  You see, everyone talks to themselves.  The ‘normal’ folks don’t realize it, is all.  The ‘crazy’ people know they’re talking to themselves, but they do it intentionally.  So who’s crazy?”

“You see Angela, you’ve been talking to yourself for a long time: ‘I can’t live without Eric,’ ‘He’ll leave his wife for me,’ ‘I’ll never be happy until I get Eric.'”

“Now, you’re in a position where you can’t live (happily) without Eric.  I mean you CAN, but you’ve talked yourself into being totally convinced you can’t, to a point where, guess what… you can’t!”

Me:
“Do what you’ve been doing.  Talk to yourself.  But be aware that you’re talking to yourself, and know that if you just change the conversation, your life will change IN THE DIRECTION YOU CHOOSE.”

Angela:
“What should I say?”

Me:
“It’s not a matter of what you ‘should’ say, it’s a matter of what you want to say.  Remember, when you talk to yourself you’re officially ‘crazy’ in the eyes of many folks.  So, let go.  Say what you want.  Be daring.  Be ridiculous.  Be extravagant.  Maybe something really wild like ‘I deserve a lot better than Eric,’ or ‘I am happy just being with myself,’ or ‘I’m beautiful and intelligent and just about any man would drop dead to be with me.'”

The session lasted an hour.

We talked about this in far greater detail.

Angela actually had me develop several audio tracks for her, based on what she wanted to tell herself.  She gave me permission to surrogate my voice for hers.  She listened to it on a schedule that I prescribed for her.

The next time I sat with Angela, she was a different person.  She was vivacious and exciting, she refused to return Eric’s calls, and she was meeting lots of new and exciting people.  Life was good!

Is It Crazy To Talk To Yourself?

It could be just what the psychic ordered!

DISCLAIMER:
I like to introduce my readers to some of my clients as a matter of instruction.  Please note that I never use real names, and I only relate people’s stories after I get their approval.

I’d love to hear how crazy you think it is to talk to yourself?

Changing Patterns, Is It Crazy To Talk To Yourself?, Personal Growth, Self Talk

How To Condition Yourself
REVERSING NEGATIVE THOUGHTS

39 Responses to Is It Crazy To Talk To Yourself?